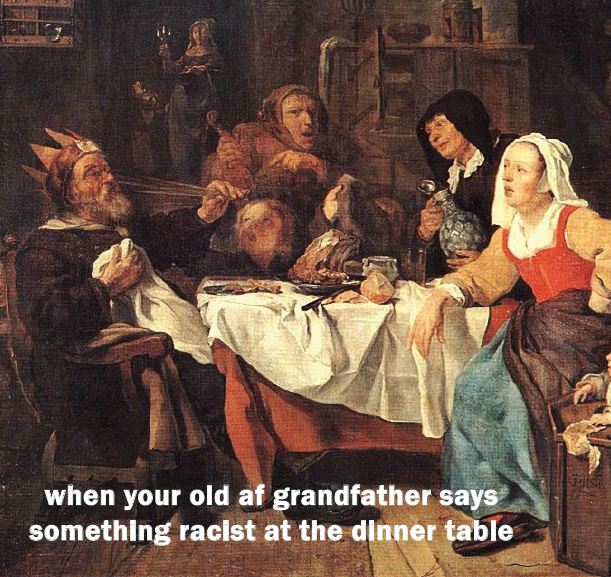 You may have been scrolling down your Facebook news feed and caught a glimpse of baby Jesus with a six pack, or a famous figure such as Napoleon Bonaparte misquoted to say something obscene. With the advent of classical art memes, art pieces older than dirt are taking on a whole new meaning, making them fresh and hip again.
But what exactly is a classical art meme? Third-year psychology student Ximena Melara-Benitez explains, “You grab a piece of art from ages ago, and try to find something funny in it, or something related to something else in order to make a meme about it.”
And they’re loved by over three-million people on Facebook, and even more on Instagram.
“I like how they mix the present culture with something that’s so ancient,” she said.
Matt Dinan, a Great Books professor at St. Thomas University, can’t help but profess his love for them.
“I’m an avid viewer of classical art memes,” said Dinan.
Dinan said while they may seem like simple humourous pictures, there’s more than meets the eye.
“One of the things I think is so ingenious about classical art memes is that they take these images that are heavily contextual, like you knew from the context that this is Adam and Eve, or this is Virgin Mary and Jesus. They take all the context away, and that in itself is funny,” Dinan said.
Dinan explained these kind of memes cross ancient cultures with our new world of social media, movies and more. Like referencing a night out drinking at the bar with a painting of the Virgin Mary.
“We’re taking something was very specific in another culture, and taking something that is specific in [our] culture and putting it on top of it,” he said.
If you’ve seen a classical art meme, you might have seen a painting of a scene in World War I, or George Washington saying something ridiculous to his wife. But do you need to be an expert on famous figures or specific parts of history to get in on the fun? Dinan says no.
“I suspect people find them funny even when they don’t get the references. People have a general sense that if it looks like classical art of any kind, of any period, and it has this kind of humour on it then it’s kind of funny,” Dinan said.
“Then there’s another sense that this is art done by liberal arts geeks, for liberal arts geeks. They’re in-jokes. It’s easier than it was in the past to become liberally educated in such a way that you can get these jokes.”
Dinan mentioned these memes can even bring older art into a new light. “I’d see this not as making art more approachable, but just participating in an ongoing democratization of the artistic world,” he said.
“I think it’s just doing what we should do in terms of making old ideas, old texts and images relatable.”
English and Great Books professor Christine Cornell agrees.
“I think it’s a fun thing to try out at least. Yeah, and it maybe introduces some people to art they might not have run into otherwise, so that’s always good,” Cornell said.
“Even if it just lures a few people in, that’s a good thing.”
In fact, Cornell argues these new memes are the same as any art being repurposed for a collage, or someone using something broken to create a whole new piece of art.
“There’s nothing wrong with repurposing things as well. It’s like sampling in music, there’s no reason artists shouldn’t do that,” she said. “And I think art works that way all the time so it kind of makes sense that they get used this way.”
But with new art comes those who don’t like it, or are even offended by it. Classical art memes are no different.
“If you ever read the comments on the Facebook page, some people think it’s awful,” said fourth-year gerontology STU student Marissa Scott.
While it may makes sense that people who conform to a certain religion may be angered by their religious figure being portrayed in a strange way, both Melara-Benitez and Dinan said it seemed the memes were more about the jokes themselves rather than making fun of religion.
“As a Christian, I know some people take it very seriously, but I feel as long as you’re not sexualizing them, saying they’re stupid or people who believe in it are stupid, it’s okay,” Melara-Benitez said.
Dinan even explained his stance on particular images, like Jesus receiving the Eucharist as light emerges from it, and the caption reading ‘when the waiter brings you your drink.’
“It’s kind of the centre of Catholicism. There is a sense that it is like that when the waiter brings your drink over, you’re like ‘thank goodness it’s finally here.’” Dinan said. “Yeah, that’s what the Eucharist is supposed to be, like ‘at last.’ It’s not offensive. You’re not laughing at the religious content, the religious content is taken in a completely different way.”
Dinan said that in the end, there’s nothing you can really do if someone wants to be offended by a meme. Especially one of Van Gogh looking like he’s just seen the phattest booty in his entire life.
“Someone will always look at an excuse to be offended in everything,” Dinan said.